So, the new year of 2017 has begun already and I’m late in updating my blog (again). So, nothing has changed, it seems.

Well, one of the main reasons for my absence was that I didn’t feel like updating my blog before today. I’ve been more or less busy, I now officially have a bachelor degree, I still mourn the loss of our dog and I’m still overwhelmed by the new fur friend my parents decided to get less than a week after our old dog had crossed the Rainbow bridge.

So, here’s the new guy. His name is Pongo and he’s super energetic as puppies tend to be. Also, he eats everything. And is so happy-go-lucky I’m not sure if it’s just his nature or if he has couple of screws loose… (Below is a rare moment when he’s finally keeping still!)

[Disclaimer: Don’t continue to read if you’re not in mood for stupid rambling]
So, I’m still feeling torn about my parents decision to get a new dog and this little bundle of joy. There nothing wrong about the puppy, of course not, he’s bright and happy and as perfect as puppies can be, but I still miss Rollo so much. There’s no day I’m not thinking of him. I know this little rascal was taken in to fill the gap Rollo had left, but the problem is in some sense bigger than just getting a new dog. I know that somehow something precious ended and the house where I grew up for the most of my childhood doesn’t feel as familiar as it used to when Rollo was there. Due to the puppy chewing everything, my old room is now more like a storage than a room, as my parents hauled in everything chewable from the living room. Also, I’ve tried to keep myself away from getting too involved with the puppy and the training process, as there are certain aspects about the methods my parents use that I disagree with. I know they can take good care of Pongo and it will grow up to be their dog, but maybe that’s the point; It’s not my dog as much as Rollo was. I don’t live there anymore, so of course it would be silly to think so.

And I have to say that I don’t hate this little crocodile puppy, no, who could even gate something so cute? But maybe it really was the high time for me to grow up for real…
[Disclaimer ends] 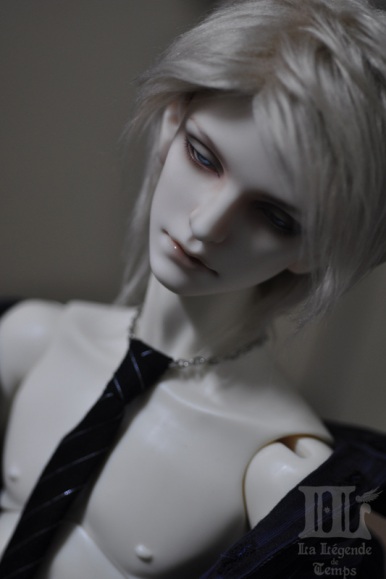 (Photo credit by La Legende de Temps official site)
And after a hiatus from buying dolls (or, to say it better, saving for Ebony), I have one head coming! I ordered one of those sculpts I just really like but never thought I’d actually end up getting: La Legende de Temps Roderich, in normal skin (not in tan, but hey, you can’t get everything). He’s the one that’s been stalking me for years. I usually end up looking doll photos and spotting a handsome doll and it most often ends up being Roderich! So, when the sculptor informed they’ll change the mold to fit into a new body and due to that they might end up changing the face too, I just needed to get the head I adore as it was the last change to get the old mold. Who knows how the new one ends up looking (probably good, but I’m not taking chances!).It’s funny, because I’m not 100% sure of who he will eventually be. Probably one of my Alchemist brothers: Royalblue or Königsblau. But I’ll find out eventually, I’m sure. ^_^
And on a funny note, I actually listed Roderich in one of my posts couple of years ago!

3 thoughts on “Dogs and Alchemists”